My son, Ryan, spent 4 months on the west coast. He returned home Oct. 1st and he’s staying with me until he finds a place to relocate. He’s 26 and fun to have around so I’m enjoying it while it lasts. I think about how fun it would be to have my youngest here too, like old times; they grow far too fast!

Last week I found myself sharing my kitchen with him. We had run a few errands together and finished with one last stop at the farm stand in town; I’m so greatful that it’s still open! We picked up lots of fresh, local goodies including a 5 lb. pumpkin that he wanted to carve.

He began cleaning out the pumpkin and carving a lot of the inside flesh out so that the light would shine through the flesh of the engraving he planned on doing.

Being my son, he thought it a waste to throw the good squash away so he baked it in a casserole dish with a hint of salt for about an hour. After it was cooked through he pureed it in the blender until it was smooth, lined a colandar with paper towel, set it over a large measuring cup and added the puree and left it to drain. After about an hour or so he decided to make pumpkin cookies from a recipe he found on the internet.

The cookies were delicious and it was nice to see my kitchen being used by someone other than me.

Here’s the link to the recipe Ryan used: http://www.verybestbaking.com/recipes/32364/old-fashioned-soft-pumpkin-cookies/detail.aspx 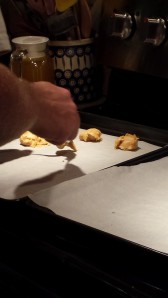